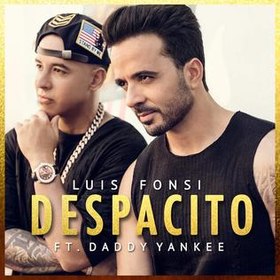 "Slowly" or "Despacito" (Spanish: Despacito) is a solo song by Puerto Rican singers Luis Fonsi and Daddy Yankee, and it is produced by Universal Music. The musical composition of the song "Despasito" was built by a kind of dance musical heritage in Puerto Rico, which has Latin rhythms. The song was seen as of December 4, 2019 about 6,551,776,349 times on sites like "Spotify" and "YouTube".

The song's success was increased by Canadian pop singer Justin Bieber, after the release of a modified version of the song. Despasito topped the US ranking for 10 weeks for the first time, for the first time a Spanish song has made this achievement since Macarena in 1996.

However, on April 10, 2018, YouTube was exposed to piracy, which caused the disappearance of 5 million views of Dspacito, and the piracy lasted three minutes, but with the intervention of YouTube management, the song was retrieved.